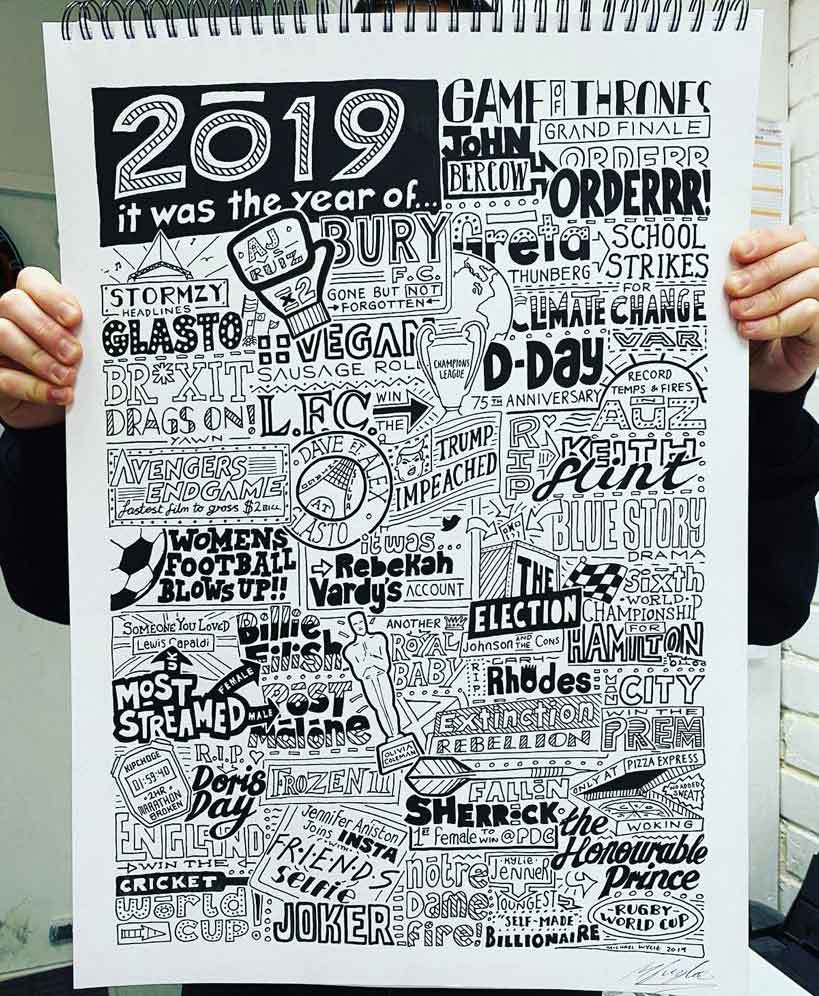 As the year drew in I decided to spend some time reflecting on the year. It’s been a great year for Sketchbook Design and definitely one to build on in 2020.

I’ve had the chance to work with some amazing clients on really interesting projects. I particularly enjoyed painting two wall murals for The University of Sunderland in London, check them out here. I was also asked to create a huge skyline featuring the iconic buildings of Liverpool at the brand new headquarters of the Park Group PLC. Another highlight was my final mural project of the year at Radio.co in Manchester where I got to paint three murals around their head office, you can find out the project here. I love creating bespoke murals as it gives me a chance to create something completely unique each time. I like to experiment with different styles and i’m just lucky that i’ve had clients who trust me enough to let me push the boundaries with my artwork.

I’ve also been lucky enough to work with Megan from Curated Makers on several retail pop-ups across the North. Curated Makers are working to revolutionise the high street with their unique pop-ups featuring local makers. In 2019 i’ve been honoured to be part of their pop-up events in Paperchase, M&S, Bents Homes & Garden and John Lewis…what a roll call!

Over the Christmas break I spent a couple of days reflecting on the iconic moments of 2019 in news, music, sport and politics and I created this drawing.

Obviously Br*xit and politics were at the forefront. However the year also featured some great moments in sport for the England Cricket team and the success of the Women’s Football World Cup. Later on in the year we also saw Fallon Sherrock become the first women to win a match at the PDC darts event. On top of that we had the hilarious outcry over Gregg’s releasing the Vegan sausage roll and the Rebekah Vardy Twitter scandal!

The original drawing of this artwork was won in a competition on Instagram but we have now released a limited edition of 25 numbered and signed prints which can be purchased here.