Hand Painted Wall Mural at University of Sunderland in London 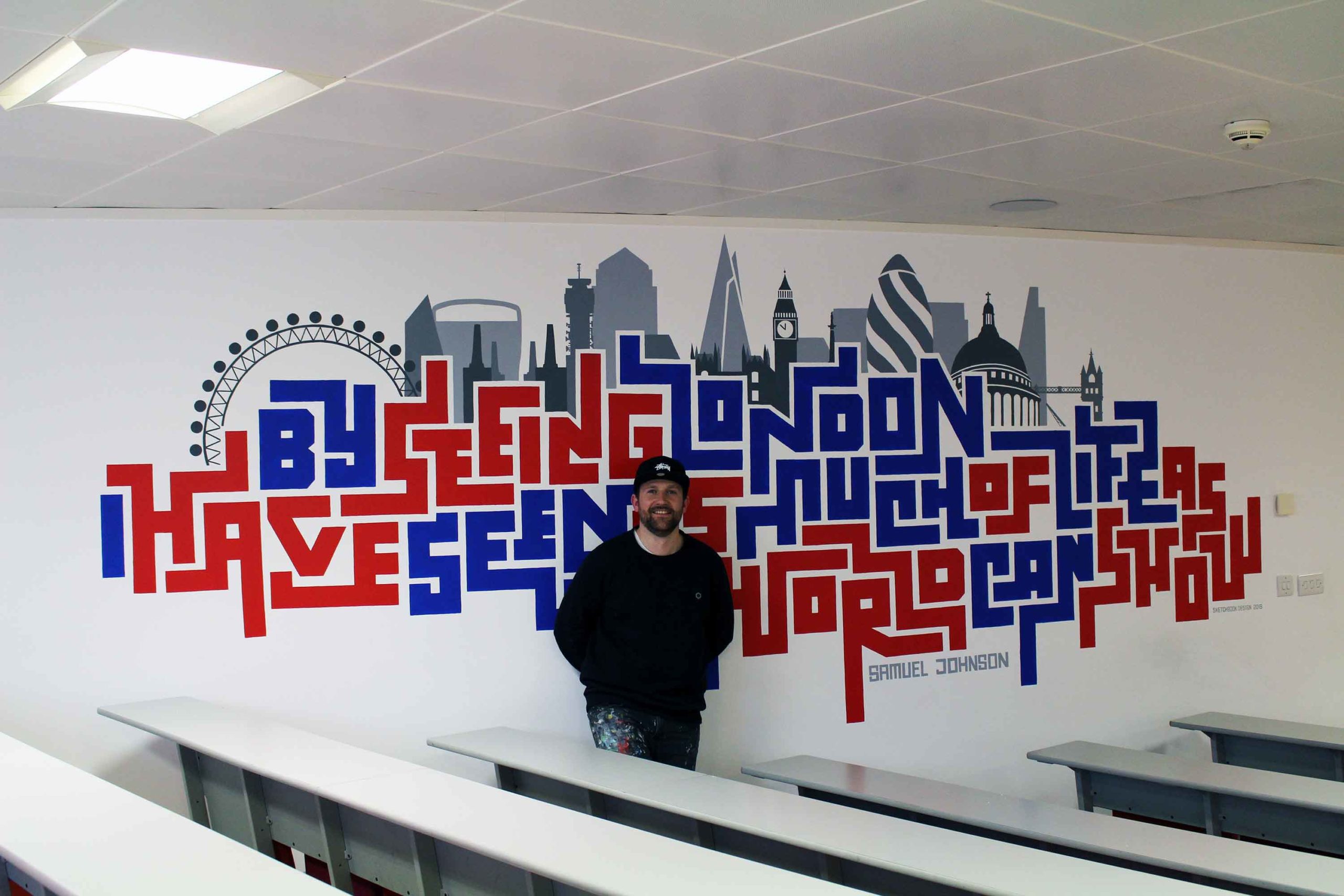 The University commissioned two hand painted wall murals, one in each of the main lecture theatres. They wanted the artwork to be influenced by Sunderland and London and to transform the plain lecture theatres into a vibrant learning environment.

The first wall mural that I created was the Sunderland inspired mural, titled “A City by the Sea”. Many of the students who attend the University of Sunderland in London will not have visited Sunderland or the North East so I wanted this mural to be a journey around the city. 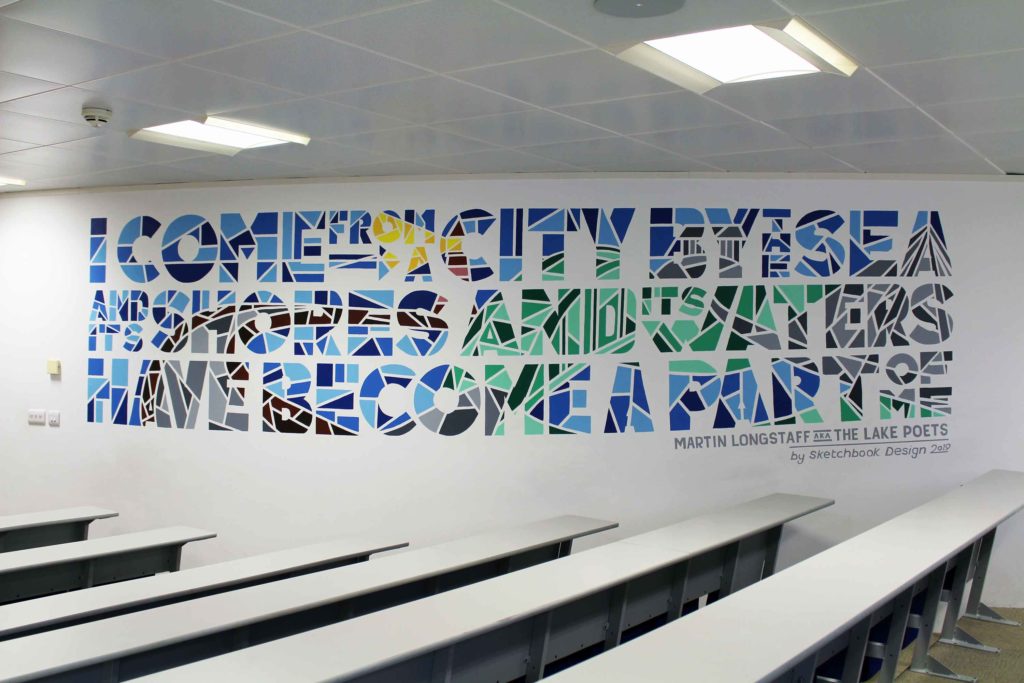 The lyrics featured in the piece are from Sunderland band The Lake Poets, whose music also features as the title music for the recent Netflix Documentary, Sunderland ‘til I Die. The lyrics sum up perfectly how it feels to grow up by the sea; for me it’s a connection that never leaves you. Sunderland also has a rich heritage in the glass industry, and it is home to the National Glass Centre, so the style of the piece was heavily influenced by stained glass.

The mural highlights Sunderland’s position looking out to the North Sea, which enabled the city to become a force in the shipbuilding industry. The mural also features local landmarks such as, Roker Pier, The Wearmouth Bridge, Penshaw Monument and the new Northern Spire Bridge.

London, it’s energy, transport system and the iconic landmarks that adorn its skyline inspired the second mural I created at the University of Sunderland. The mural features a famous quote that Samuel Johnson made in the 1700s, “By seeing London I have seen as much of life as the world can show”. This quote is as true now as it was then. London is truly a vibrant, multi-cultural city and this is something that should be celebrated and embraced. 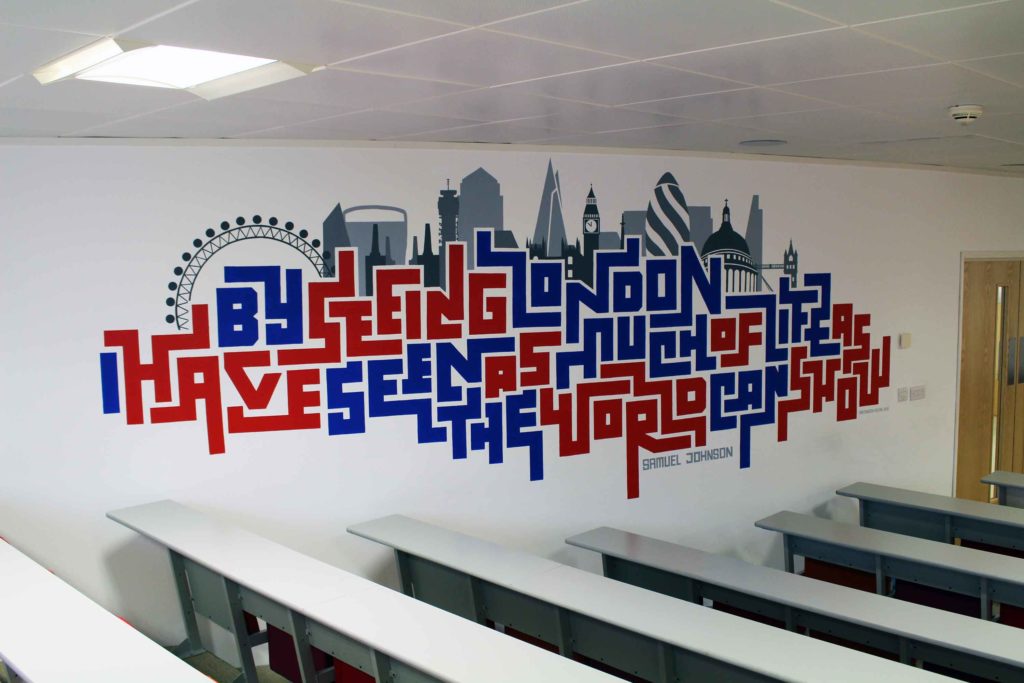 The colour scheme of the mural was inspired by the branding of the world famous London Underground. The style of intertwining typography is a nod to the transport maps and the overall energy of the city. I have incorporated many of London’s iconic buildings into the skyline above the quote to celebrate not only London’s history but also its present and future. The overall mural is big and bold and requires the viewer to take a journey around it to appreciate it fully, much like London.

You can check out more examples of the hand painted wall mural we have produced for businesses here. If you’d like to commission your own bespoke piece of work please contact me.