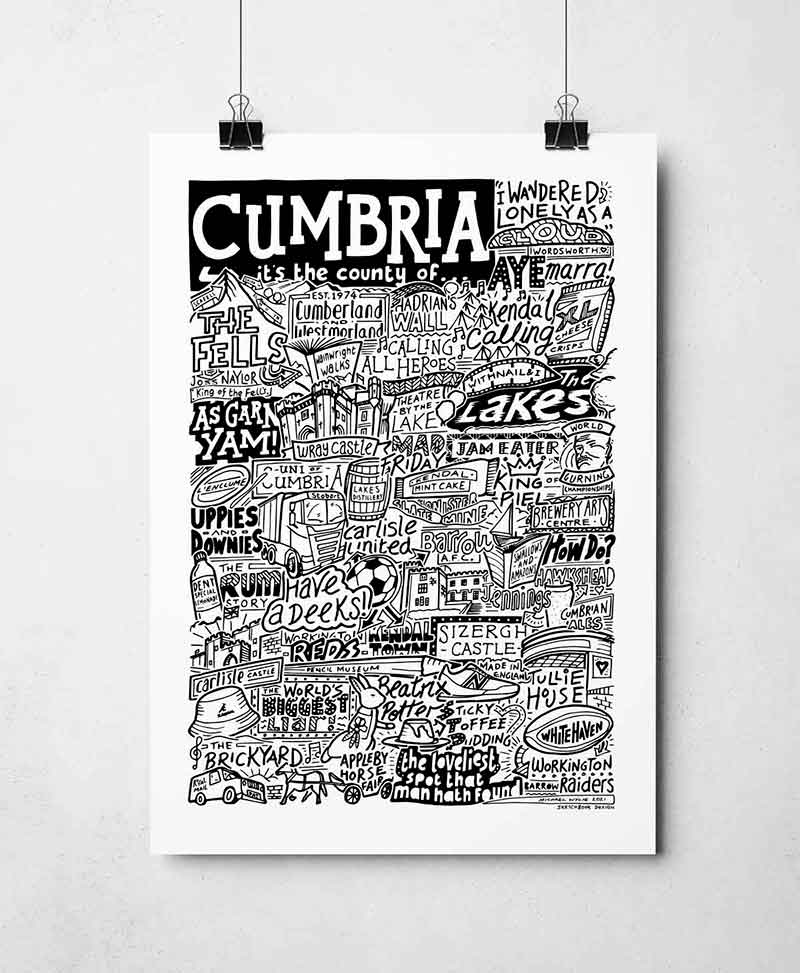 The Cumbria Print is the most recent design to be created by Michael at Sketchbook Design.

Cumbria has long been a place of escape for many. The county stretches from the Scottish borders in the north, down to the Yorkshire Dales at the southern point. It includes some wonderful coastline, as well as fantastic countryside.

The Cumbria Print was chosen not only to include the Lake District and its amazing beauty, but as a nod to the people of the county too. Including the lesser-known landmarks and some items closer to the Cumbrian people’s hearts.

The research on the Cumbria Print started with an extremely long list of different things.  It’s unfortunate not everything can be chosen. But there are only so many items that can be used. The list is whittled down, and the design commences. Even at the start of the design it isn’t fully known what will be included. It all just depends on how the design comes together.

Here is a little insight into the creation of the design… 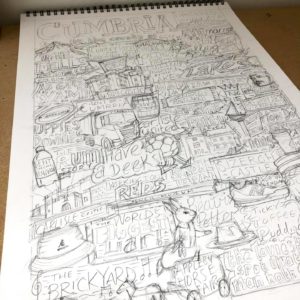 Included in the Design

Here we’re going to go through some of the items that did make the final cut for the Cumbria Print. These range from food and drink to castles and Kings. Of course, the many landmarks are not to be missed and we’ve even included famous people too.

Cumbria, we believe, is most famous for the Lake District. This design does incorporate many landmarks you can discover and explore on a trip there. Scafell Pike, the highest peak in England, the theatre by the Lake in Keswick. Did you know the lead pencil was invented in the Lake District? And there is even a Pencil Museum to tell you all about it.

There are many lakes to swim, kayak, and even take a boat ride. You can also  visit many fells to hike to see the fantastic views, too many to even name. Wainwright is potentially the most well-known fell walker and writer of his pictorial guides. You can even challenge yourself to hike the 214 Wainwright fells. Now, who doesn’t love a Cumbrian Ale after a long hike up one of the fells? And Kendal Mint Cake is a must on those long treks! 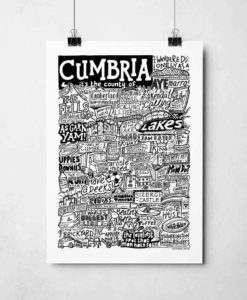 As well as the lakes and fells of the Lake District, there are the historical places of interest. These include Hadrian’s wall, Carlisle Castle and Honister Slate Mine.

The King of Piel is a local legend in Cumbria. The landlord of the public house on the tiny island, just off Barrow in Furness, automatically becomes the king in such a fantastic local tradition. But who is the most famous Cumbrian? Of course, we can’t forget Wainwright, however there are many others who hail from the wonderful county. Wordsworth is also a writer from Cockermouth in Cumbria, a poet whose work celebrates the nature of the county.  Beatrix Potter is a world renowned author, mainly for Peter Rabbit. She is also credited with preserving much of the land that now constitutes the Lake District National Park.

If you’re heading to Cumbria, maybe you’re off to one of the several events held each year. The World Gurning Championship is held at the Egremont Crab Fair and has been held annually for hundreds of years. Another very traditional event is the Appleby Horse Fair. This is an annual gathering of travellers during the first week of June.  Other events such as Kendal Calling and even the Uppies and Downies attract thousands of visitors to the county year after year.

We can’t end this blog without a mention of Postman Pat, Michael’s favourite childhood character. The story was based in the fictional village of Greendale located not too far from Kendal.

What are your favourite parts of the Cumbria design?